Hosted by the “Buontalenti” High Institute in Florence the YOU-ROPE European Partners presented the project final results, telling a two-years significative experience in the world of the Youth Rites Passage 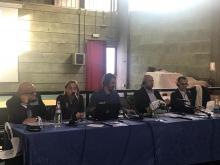 Hosted by the “Buontalenti” High School, last 25 October 2019 took place in Florence the final conference to show and share within the local community all the results achieved by the YOU-ROPE Project -Youth Rites of Passage in Europe (ERASMUS+ K.A 2, Strategic Partnerships for YOUTH, Development of Innovation).

The Event was attended by all European project Partners - CEPISS Soc. Coop., LABCOM - Ricerca e Azione per il benessere psicosociale Soc. Coop. and Spin Off of Florence University, PSITERRA Association (RO), ECTE - European Center in Training For Employment (GR) and ETCS Soc. Coop. (ES) – and by the main local Public Institutions such as the President of 4th Disctrict of Florence Municipality and the Counsellor for the Youth Policies. Their participation underlines the synergy that has been created at local level around a very relevant theme as the transition of young people to adulthood and their participation to social and community life.

The Event was attended also by many students and teachers coming from the Secondary Schools locally involved in project realization – such as the “Buontalenti” and “Meucci” High Schools – other than by several professionals working for education or within youth policies (youth workers, educators, ecc.)

Starting from the American study of D. Blumenkrantz & Goldstein 2010 “Rites of passage as framework for community interventions with youth”, the YOU-ROPE project aimed to identify and to implement positive rites of passage involving young people and youth workers/ educators, making participants aware about the disregarded role of rites of passage, by designing and improving shared positive “rites of passage experiences” to be part of the community. According to this general objective, within the project it has been developed the Framework Survey, a mapping of the most used Rites of Passage in partners' countries, and the Guidelines for youth workers and educative professionals. These Guidelines are the core output of the project as they contain the main methodological and operational indications to guide young people towards positive rites of passage that improve their sense of belonging to a community and consolidate the development of their individual identity. As an added value for the implementation of the Guidelines, the Partners have been able to count on the direct support and collaboration of Prof. David Blumenkrantz, theorist of "Rites of Passage Experiences" (ROPEs), from which the project has drawn inspiration for the creation of its innovative activities revisited in a European key. The American scholar also took part in the final event, bringing his personal experience, meeting young people and inviting them to reflect on the value of their passage to adulthood.

The final event was combined with the last Partners’ technical meeting, held on 24 October 2019, at the Centro Machiavelli in Florence.